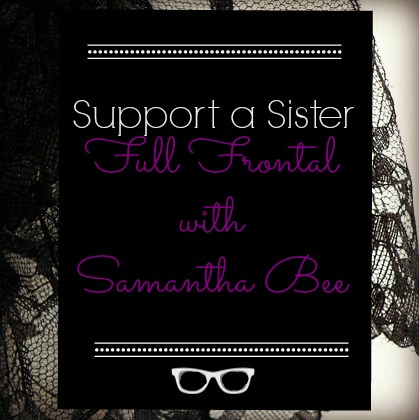 Ladies, we have a new representative in the world of late-night TV. Starting Monday, February 8th on TBS Samantha Bee will join the males-only club of late-night television hosts with her new show titled Full Frontal. If you’re a fan of The Daily Show you will already know her brand of witty, tongue-in-cheek, sarcastic humor. I have my DVR set to record it (because the term late night implies I would have to stay up past 9:30 to watch it) and I encourage you to do the same and support this sister.

You see I’m not only excited to see a woman breaking though a barrier, I’m excited that it’s someone whose work I can truly support. In the past there have been three other woman who have hosted a late-night show–Joan Rivers, Chelsea Handler and Kathy Griffin. While all are funny their type of humor often relied on the shock value of a woman being crude. I’m all for crude but for me it wears thin quickly. It’s not enough to base a long-running show on. And I’ve never been a fan of women who get ahead by ripping on other women. Joan lost me when her red carpet comments got personal and ugly.

This is why I think Samantha Bee will have staying power. She’s smart. To get her humor you have to know some background about the topic. She was able to skewer politicians on The Daily Show because she understood them. She knew enough about their views to ask the questions that led to some hysterically funny subtle confrontations. Her subjects would walk right into the jokes and usually not realize it until later. If you watch this preview of her show you’ll see what I mean. She calls bullshit in a really funny way. She’s the opposite of pratfalls and shock-value crudeness.

I’m not only encouraging you to catch her show but let’s talk about it too. Bookmark this post and come back and let me know what you thought after the first show and I’ll do the same. Let me know if you think she has what it takes to take on Conan and Colbert. I’m looking forward to having a smart woman’s perspective but I won’t keep watching just because she is female. I’ll tune in but I’ll only keep watching if she brings the smart, sex-positive, female-supportive humor we need more of.